ColEm 1.0 for Amiga OS4 and MorphOS

ColEm Amiga is an OS4 and MorphOS native port of Marat Fayzullin's ColEm Colecovision emulator. This version is based on the classic Amiga port by Paul Hill. The OS4/MorphOS version is currently being maintained by Bob Wicksall (rwicksall(at)gmail.com). 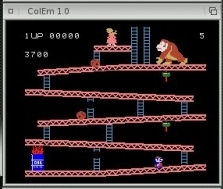 To run the emulator: Since release 4 you can just click on the CVLaunch icon.